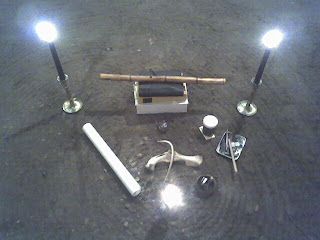 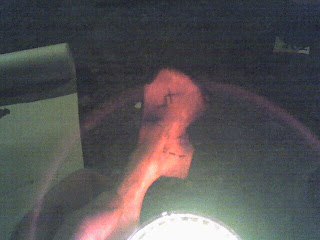 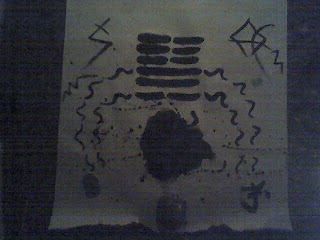 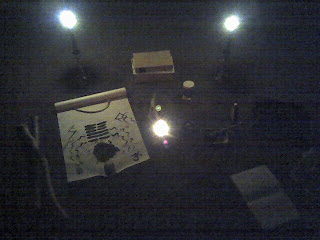 Banished using the large Masonic bell that a Frater gave me. Performed a freestyle chaosphere banishing. Bell in left hand held up ringing into the heavens, heavens falling into the bell. The wand pushing forth into the aether cast the chaosphere that was cut into space by sword like motion.

This done I sat at the apex of the triangle of fire. I cried. I cried like a child who was lost. And I was lost. I have been pained by this burden and have been set to a task in which I have no idea what the right direction or path is. So I cried. I cried because I was lost and I cried because I am losing my grandmother. My heart is heavy and sick with this sadness. And I have been behaving like a rotten child acting out with no knowledge of why or for what. Acting out because of a pain that cannot be interpreted.

The sigils on the bone were simple. “Stay” with yin and yang lines and “Go” with positive yin and yang lines. It took longer than I expected for the bone to begin cracking but it was apparent when it did. It was audible as well as tactile. It was a strangely pleasurable feeling for the bone to be cracking in my hand. It felt primal and at the same time it felt like a pressure from my own being was released with the answering of my question. Not to mention that the smell of burning bone seems to trigger something in the psyche. One is pulling answers from a world stale and dead, from a world unknown. One is not only practicing pyromancy but also necromancy. These bones and the smell of burning bone attract the kuei, it attracts the ancestors, it opens the gates to hell.

The answer: The first crack seems to tell me to stay. The bone cracked to the yang line under the stay sigil. I meditated on this and accepted it. I needed to know everything though and wanted to know what the outcome in the other way would be. So I continued to hold the bone over the flame. The next crack came on the Go side but this time it was a deep obvious crack that touched the sigil itself. While reading the cracks I was curious as to where the lines were going so I applied a bit of pressure with my carving tool to the end of the crack. A small piece came off of the Stay side, under the sigil. A large piece came off of the Go side taking with it a good bit of the sigil. This resounded in my mind as a Go answer.

The hexagram drawn to further explain this answer was Shêng / Pushing Upward. This hexagram again describes motion, moving, “go”. But in this sense it refers to the work of the situation. The move will be work and will be more emotional work than anything. Things will have to be acted out in such a way that the transition is natural, smooth and understood. This means absolute peace, even if forced, up until the move. This means me not acting like a hurt child. Six in the beginning. The growth of wood from the earth needs yielding earth. If correct action is taken, if the growth is done with yielding then the motion (the move) will be seen as right, it will seem a natural progression rather than a desperate move. The desperate move will hurt feelings. The growth motivated move will be seen as right and natural. There will be no resistance. Nine in the third place. The beginning of the upper nuclear trigram Chên / Movement. In this seems to be a warning not to hesitate because things seem good. This good timing must be taken advantage of. If the move is going to be successful and painless then it will have to be done during a time when it would seem the move is not necessary. Don’t hesitate when this time comes. Do not make this move during a time of resistance.
Posted by Frater Tzu Jan at 10:23 PM