This NOX was quite an adventure but one well worth taking! Frater Beenja has had to take a leave of absence for personal reasons so we seem to be somewhat of a transient temple. This being said we certainly are innovative.

Frater Usul, Soror Sciurus, Frater Fiducia and myself met for sushi, entertained one another and entertained a potential new SEUSS member. We deliberated shortly on ritual space before deciding firmly on a hotel room. There was one directly across the street. So we separated, Frater Usus and myself headed to the temple to pick up the egregore and other ritual tools and the others prepared the room by moving beds and tables etc.

The space was really quite nice. Open floor with a bedside table for a main altar. Our group egregore sat sternly behind two burning black candles and we began the proceedings. Opened by GPR and got to work.

Frater Usul presented first. We performed a healing ceremony for a Frater. A machine of a ritual. Precision oriented it seemed that this work wasted no gnosis. It took what it needed and all and used it with used it with precision.

Then Soror Sciurus presented us with a lupine delight. We nipped and bit and snarled and howled. Then we killed and fed our young. This created wolf servitors. I created mine for my son, a protector and hunter of goods on his behalf. I gave it to him the next day and he immediately named it “Dooga Dooga Dooga”. He loves that thing, even if it does smell like incense and cigarettes. 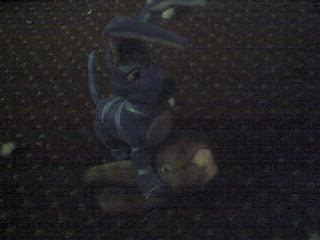 My ritual was presented after the traditional purging ritual. I will spare gagging you with the details of this, Sr. Sciurus’ special treat.

So my ritual… I have neglected to write until now. I created it in my head and presented and performed from my head. Bad form. But the job was done. So this ritual, shit I suppose I should write the damn thing. Okay.

Results:
11:22:2008 performance
Nothing in the way of actual manifestation of the specific intent has yet materialized. I should note however that I know for a fact that I fucked up the sequence. I got lost in the vibrations and completely forgot to cycle the energy. My studies of Taoist Yoga seem to indicate that this is not such a big deal as the practiced magician’s energy will follow these cannels regardless. It is distracting however when working in a group. My not being in tune with the group bothers me. I imagine that it was distracting to others as well. I would like to give this one another try, this time attending more to the sequence of the vibration in the microcosm. I think I was too focused on the mechanical structure of the ritual. This being its first performance I will forgive myself. I honestly was not positive that I would even be able to get the thing to work. But it did. So we are still waiting for any sign of actual manifestation of Will. In the meantime I think I may redo this ritual at our next NOX.
Posted by Frater Tzu Jan at 10:04 PM No comments:

There is a calm tonight. I directly relate this to the demon trapping aspect of last nights ritual. The more I think about the 2nd phase communication the more I think that it was an inspiration and instruction on the third phase of the ritual, the demon catching/casting off.

There was allot of communication and activity today in all aspects of my life. I felt dizzy and heady for a bit today, but this passed. There are good things afoot in several directions. A Xaosphere of delights.

Actively breaking from all activities this evening.
Posted by Frater Tzu Jan at 8:28 PM No comments:

Note: I have added the CEPC to the GPR. This gets the energy moving as it should.

Ritual happened in three parts this evening. Mostly do to an overwhelming dissatisfaction and agitation that I went into ritual with. I began by redrawing the talisman. I did not use the other two to draw from so this makes my first attempt at free recall. This was performed with accuracy. The things that were different are the things that I imagine will always be a bit different as some of the talisman, or I should say on the outsides of the talisman are drawn automatically. Though I was very dissatisfied with it at the time looking back on it I did not do too badly with it, in fact I think that it worked in its own right. The dissatisfaction led me to the next phase of ritual. 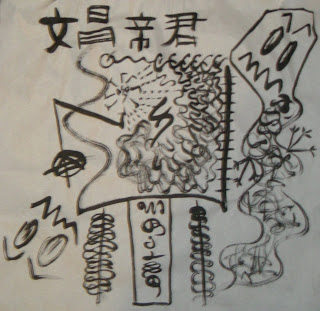 Phase two of the ritual was a communication. I performed a light invocation of Wen Chang Di Jun, unfocused my eyes and began drawing. I believe that I will have to sit and meditate on this communication, as I have no clue what any of it means at the moment. There is one aspect that I recognized during ritual and that was the demon trapping bowl. This part of the communication led me to phase three of the ritual. I was left after this was finished thoroughly disgusted with myself. A horrible feeling. 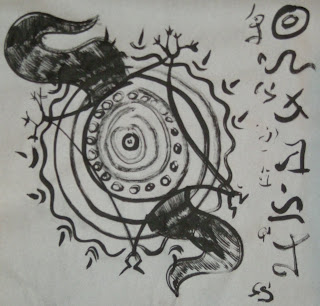 Phase three was the full on dome capturing. I took off my glasses, leaving me relatively blind and began putting ink on the paper. I used a lot more ink than I might ordinarily in this. There were several demons captured here; self doubt, depression, xxxxxx xxxxxxxxxxx, and laziness. These were collapsed in on themselves and placed behind the yang lines. These yang lines are carried with me and around me. Not so much a caging of the demons as much as a cage around the self through which particular demons cannot enter. 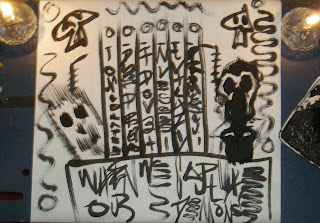 Posted by Frater Tzu Jan at 8:35 PM No comments:

Received my first Tatau tattoo. This method of tattooing is quite meditative. It has to be. I made the sticks for my sister, Eve, who is a tattoo artist and owns the Primitive Body Art tattoo studio here in Columbus. I made the Tatau sticks for her and will be continue to make the needle mounts. I will make a pair for myself as well and we will be doing much, much more of this style work as the years move forward. I am excited to get more.

The way the ritual method seems to work is that as the tattoo progresses the pain and posture force one into a meditative mind frame. It is either this or just sit in cramped agonizing pain. I focused on Wen Chang Di Jun and my last talisman. My meditation altar was beside me and lit with flame and incense. The process took about two hours for this small piece. This was a practice piece of course thus the short time and simple design. I will be developing a much more intense ritual and design in the future.
Posted by Frater Tzu Jan at 11:55 AM 1 comment:

The development of this style is building on itself. Much like the leaning of a language or a written language rather, the process takes experimenting with the utensils and the strokes and repetition. Repetition is key to memorization and this is what this technique calls for. The talisman must be drawn, or recreated every time it is used. Further before it is fully effective, it must be memorized. In this the practitioner can draw the talisman, can follow the neuroglyphic map without being interrupted by creation, or looking over to copy. Mantra can be added to the fold, and should at a later date. I did use the mantra of the name of the deity that I am using, but this will not be the final product. The deity is charged with overseeing the productivity of and the success of the talisman as it manifests in the ethereal and attaches itself to macrocosms. The deity also oversees the interpretation of the talisman. The deity carries the talisman into the spirit world and sees to its activation, follows the map to its end. My wife had an interesting comment about the talisman this evening. When I was finished and she came into eh study she saw it on my altar and noted that it looked like a treasure map. So right she is!
So the basic rundown of the method is, create talisman, recreate talisman adding to it until it is complete and memorized. Once the talisman is memorized I will be figuring out a grand finale ritual to blow it up. 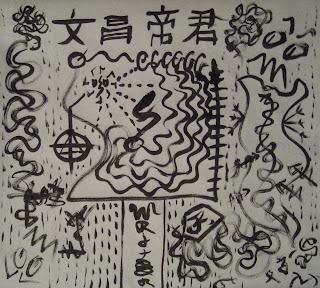 Posted by Frater Tzu Jan at 8:58 PM No comments:

GPR
Altar lit
Meditation with SOI as mantra
Talisman created. Not charged. This will give me something to do tomorrow night.
The creation of the talisman was however somewhat of a charging in its own right. There is a good bit of gnosis that goes into the Creation of one of these things. Without gnosis the whole thing is a bust from the get go. The point is that this is a system of lines drawn out from the unconscious mind, brought to the surface by agitating the depths of the mind with trance. When this moment bubbles over itself and into the lines and the gliding of the brush on the paper you have a map. This talisman is a neuroglyphic map. We do not create these they are discovered and then can be used to achieve the Will simply by following them, the same way one would follow a map. This will come. 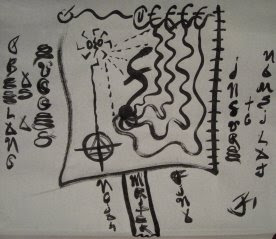 Posted by Frater Tzu Jan at 9:19 PM No comments:

So, Should you wonder what the hell I've been up to and why my XaoTao journal has suffered so terribly as of late. Check out my alter ego at:

My focus has been on family and working nights. There is a present shift. Not a paradigmal shift, but a inter-paradigmal shift. I will know more as the water settles. Things are good. I am exhausted, but things are very good.
Posted by Frater Tzu Jan at 12:46 AM No comments: