Divination Concerning the Move to Carrollton, GA and UWG

Method
0. Banished by GPR
1. Meditated on the move and creation of jiaguwen sigil script.
2. In light trance state used brush stroke techniques to paint sigils (see Figure 1).
3. Threw coins to ascertain the Hexagram.
4. Used 20-sided die to obtain numbers to be interpreted through my personal gematria.
5. Banished by GPR 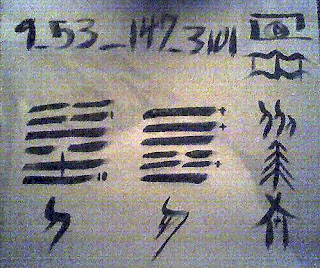 Figure 1
Results
I will be using the Wilhelm/Baynes translation of the Book of Changes for this interpretation.
The hexagram obtained for my aspect of the move was Chên / the arousing (shock, thunder). I threw an old yang (9) at the beginning and an old yin (6) in the fifth place. This hexagram represents one of the eight repeating hexagrams. The trigram Chên is repeated. Here was see thunder repeated. “The first thunder denotes fear and trembling, the second denotes shaping and exploring.” (p. 649) There is no doubt how this plays into my concerns about this move. There is a lot of insecurity for both my wife and I. School does not exactly pay well and we have a child. However, the end result of this is that enduring the fear, enduring the initial shock of the move and perhaps enduring the fear of financial insecurity will pay off in the end.
THE JUDGMENT
Shock brings success.
Shock comes-oh, oh!
Laughing words-ha, ha!
He shock terrifies for a hundred miles,
And he does not let fall the sacrificial spoon and chalice.
(p. 647-648)
The judgment commentary also deals heavily with the idea of beginning again in the spring, cultivating respect by attention to detail and stirring ones qi from below. All of these ideas play well into the idea of finishing my education. Not only will this require an attention to detail but will also foster a respect that will bring professional success.
Nine at the beginning repeats the initial judgment adding, “…Fear brings good fortune. … Afterward one has a rule.” (p. 649) Six in the fifth place again indicates success. This time there is the indication that nothing will be lost. While there is still danger, going “hither and thither” invokes this. There is indication to keep still, hold to my center. The danger is indicated by the nuclear trigram K’an while Kên indicates averting the danger by keeping still. It seems to be indicated that this has already been achieved by my already being on this path.
The hexagram for my wife concerning this potential move is intimately tied to mine. She obtained Wu Wang / innocence (the unexpected). There is a very strong interplay and relationship between my Chên and her Wu Wang. To start the lower trigram of Wu Wang is Chên, the repeating trigram in the hexagram Chên. Further, one of the nuclear trigrams in Wu Wang is Kên. As previously mentioned Kên is also a nuclear trigram of Chên. In fact they are in the same position within each hexagram. This will be expounded upon later.
This hexagram is ruled by an old yang in the first place and an old yang in the fifth place. This divination resulted in an old yang in the fifth place and an old yin in the second place. To begin the ruling judgment indicates “…the essence of the Creative, as well as the tirelessness of the supremely sincere.” (p. 509)
Should misfortune come it is sure to have an external origin, thus it will come and go. It seems that this may be counseling patience. If misfortune presents itself success will come in allowing it to take its course, not forcing anything and not concerning oneself too much with it. This theme is again repeated again with the old yang (9) in the fifth place. This line indicates that the individual is free of internal illness and that any illness befalling has come from those around him or her. “One should not try an unknown medicine.” (p. 513) This line ties back to not forcing anything. Be still (Kên) and things will work themselves out.
The old yang (9) at the top in combination with the old yang in the fifth concerns me. Here we are given,
Innocent action brings misfortune.
Nothing furthers.
Action without reflection brings about the evil of
Bewilderment. (p. 513)
This is not a curse however, as we see the need for reflection. It seems that action itself will not bring misfortune but action without thought, reflection, perhaps planning in the case of this specific divination. In Wilhelm’s endnote on the hexagram he restates that the overall personality of this hexagram is that of innocent naïveté or being without ulterior motives. Nine at the top seems to indicate that the time for action has passed. I wonder if this is not referring to school in particular as my wife also toyed with the idea of schooling some more rather then working. This would confirm her leaning toward work. The end result of these line placement “indicate that for these lines the time has come to remain quiet.”
In sum, perhaps this is an indication that the ball has just bounced back into my court. There is no blame or fault in chilling out while the other acts. My personal interpretation is just that. I will be in a very active role finishing my degree. My wife will be in a more passive role, working. Active and passive here have been delineated by the original focus on school, which would be the primary reason for moving to Carrollton. I cannot further interpret my wife’s hexagram. I feel that she will have to take what I have thought and her own interpretation into consideration. My overall feeling however is that this will be a good move for me and not a terrible or bad move for my family. In the end, in the grand scheme, it seems favorable.
Posted by Frater Tzu Jan at 3:08 PM