The Hermetic Walk of Seven Monks 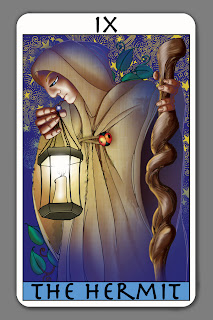 Last night seven monks gathered at the Tzu Jan Temple in the foothills of the Appalachian mountains on the auspicious first night of the Saros 156 cycle. The partial solar eclipse on this day marked the beginning of a cycle of eclipses lasting 12 to 13 centuries. It is possible that the seven monks will continue on their journeys until July 14th, 3237; if not together then as independents. No one is for sure if they were immortals, rumor has it that they were.
The monks drank of consecrated wine. The spirits of several peoples were infused, to include the great oceanic squids, Godzilla and Thanateros. They had traveled from great distances to be with one another on this night and made merry within a sacred circle drawn by the seven. The monks drew five points of light and sound from within themselves and placed them at the four sacred corners of the world.
This done, the seven monks lit their lanterns and walked into the wilderness. A few townspeople saw them enter the wilds in the darkness of night. Such was the intensity of their focus and presence that none dared to stop and ask why these monks were leaving. The monks themselves kept the true nature of their purpose close to their hearts, with many intimations shared only with one another, but none speaking the true purpose aloud, even among themselves.
The chi was such on this night that the moment they were out of the artificial light and under the canopy of trees shaded even from starlight they were pulled headlong and with great speed into the sacred cool, damp, darkness of the wild.
One monk asked, "What are we to learn?"
Answer: "Enlightenment"
Monk: "Isn't enlightenment a rather selfish goal?"
Answer: "As your enlightenment increases so does that of the world"
Monk: "And what enlightenment exactly?"
Answer: "That of Nature"
Monk: "Internal nature or external?"
Answer: "Is there a difference?"
To be cont.
Posted by Frater Tzu Jan at 9:10 AM

The name of the seventh monk is not known.

LMAO, Yes, the Seventh Monk was quite illusive. :)

Godzilla!!!! APPROVE :)))
The walk was one of the most beautiful experiences I have had in some time. I will take a part with me as I journey into the wild again tonight.